If you’re like me, you probably spend a lot of time on Twitter. I don’t blame nor judge you for that — it’s a simple fact of life. You are also aware that it can be overwhelming and anxiety-inducing more often than not, what with everyone being on edge for, ah, many reasons these days.

Sure, you could just spend less time on the hellsite, but we both know that’s not going to happen. Instead, let’s take a few steps to improve our experience and lessen the impact it has on our mental health.

You already know how to unfollow, mute and block people, and that’s definitely the first line of defense. But there are a lot of people whom you enjoy following and reading, but perhaps they are passionate about specific topics you’d rather not be bombarded with 24/7 on your timeline?

That’s where our weapon of choice comes in: Twitter’s “Muted words” feature. Whatever words you put there, any tweet with them will magically disappear from your timeline. You can find this option under Settings -> Content preferences -> Muted -> Muted words. I highly recommend bookmarking it.

This feature is far from perfect as it comes with several limitations, but it does the job:

On the web, muted words are listed in reverse chronological order; on mobile, however, it’s sorted alphabetically, which can be useful at times.

(A note: You can also use Tweetbot, which can use regular expressions and other things; I, however, mostly use twitter.com on desktop and the official app on iOS.)

I use muted words for a couple of things:

To give an example, here are the words I filter right now to cut down on all things coronavirus: quarantine, COVID19, #COVID19, expose, virus, pandemic, coronavirus, covid-19. 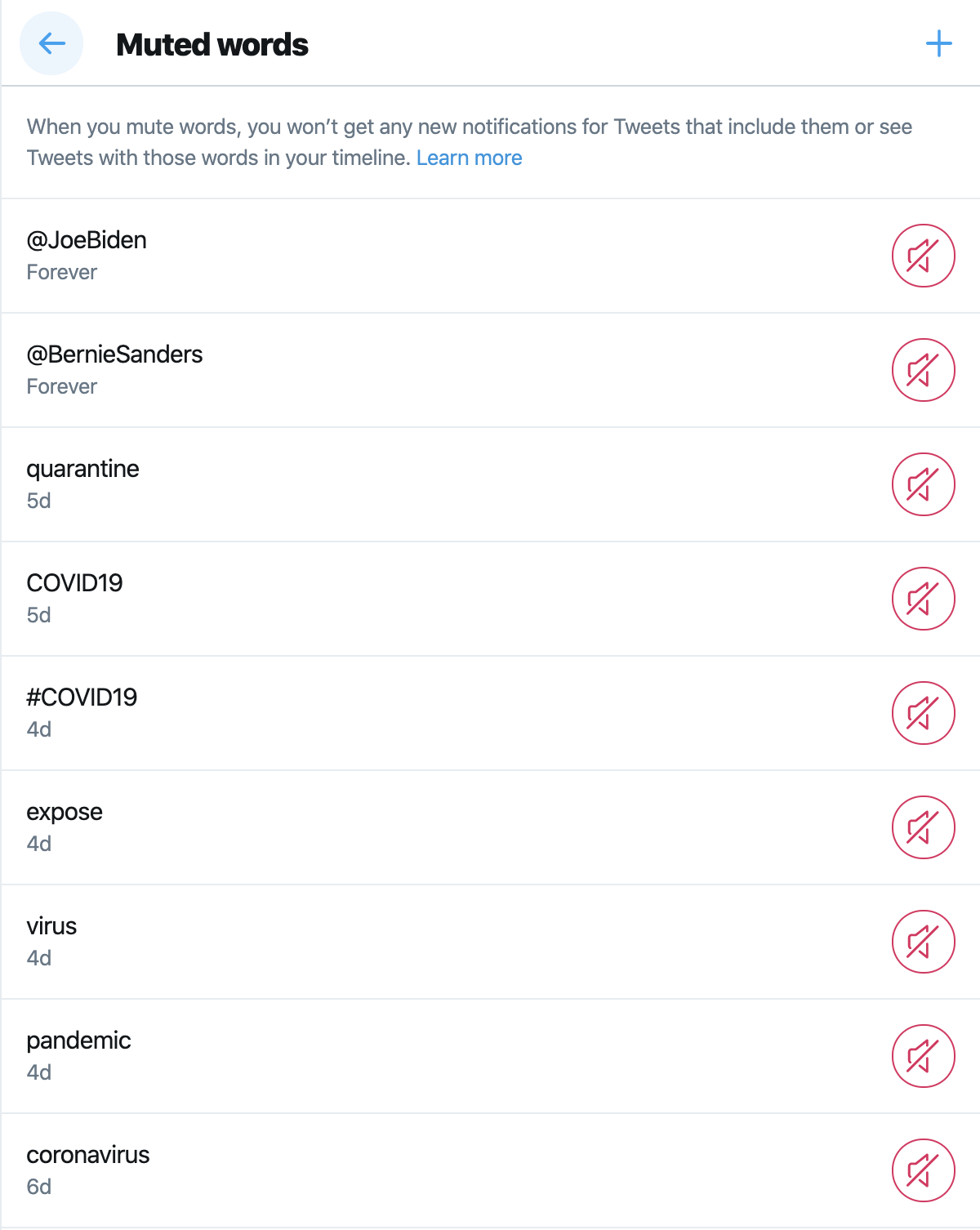 Muted words is not a perfect solution: you’ll never be able to filter something out completely. But I find that to be, in a way, an advantage: my American Politics filter, for example, lets just enough stuff through that I still know what’s going on most of the time.

So, great, you’ve cleaned up your timeline and now it’s 50% less anxiety-inducing. But Tamas, you ask me, what if, from time to time, I do want to see what everyone’s tweeting, without any filters?

For that, we’ll employ another Twitter feature: Lists. More importantly, the fact that muted words do not affect lists. So all you need to do is put everyone you follow on a private list; you can even pin that to your timeline on iOS (and maybe Android too?).

Here’s the list I use, pinned on my timeline and I can just swipe right to read it. On Desktop, you’ll find it under Lists but of course you can bookmark that as well.

Now, you can, of course, go through each and every person you follow and manually add them to your “Unfiltered” list, but that’s going to be very time-consuming, so we’re going to use some command-line magic to do this in one big swoop.

What you need: Ruby 2.4+ installed on your computer and having a Developer account at Twitter. For the latter, if you haven’t done so yet, go to developer.twitter.com and apply for one; unfortunately, it can sometimes take days for them to approve you. Once that’s done, create a new, dummy app you’ll use for this.

Now you’re almost ready to go, but first, you’ll have to log in and authorize your command-line client. Run t authorize and follow the instructions; it’ll ask for the API key and API secret key, then gives you a URL where you can log into the dummy app you just created.

Now you’re ready. Create a new list on the Twitter web UI, name it whatever you want; I’m using “Unfiltered”. Then get a list of the people you follow and pipe it into a text file: t followings > ~/my_followings.txt, which you’ll use to add everyone to your list: cat ~/my_followings.txt|xargs t list add Unfiltered. You can also do this with just one command, as you might have deducted.

And that’s it! You now have both a heavily filtered timeline that keeps you mostly sane, but also the ability to check it out without any of those filters, if you wish to.

The only thing you have to keep in mind now is whenever you follow or unfollow someone, you’ll have to add or remove them to/from your Unfiltered Twitter list as well. I find that to be a small price to pay, personally.